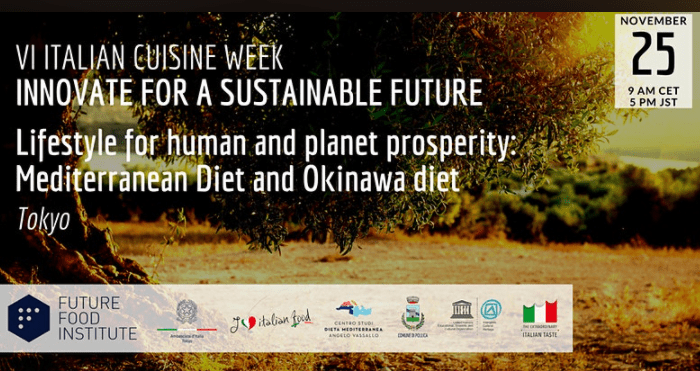 On the occasion of the “VI Week of Italian Cuisine in the World” organized by the Ministry of Foreign Affairs and International Cooperation, the Future Food Institute promotes, with the Municipality of Pollica and Centro Studi Dieta Mediterranea “Angelo Vassallo”, from November 16 to December 3, a schedule of events related to the themes of food, Mediterranean Diet and innovation, as a lever both of competitiveness and sustainability for the promotion of the Country System.

The agenda connects the globe from East to West and involves 8 Italian Embassies and Consulates, prestigious Cultural Institutes and private organizations of the foreign and national panorama. Everyone will witness the dynamics related to Italian cuisine, innovation and the Mediterranean Diet as the glue between Italy and the World.

Eleven years after its nomination, there is a growing awareness of how the Mediterranean Diet is much more than just a food model, but a wealth of science, traditional knowledge, skills and identity values generated by a territory, Cilento, which can be considered as a real laboratory of biodiversity of land and sea, capable of releasing a natural wealth unique in the world.

Like Cilento, Okinawa, the island of the Ryukyu archipelago in the south of Japan, is the cradle of one of the most famous millenarian diets for the wholesomeness of its eating habits, which make the island historically known for the longevity of its inhabitants and for this reason called “the land of immortals”. The Okinawa diet is not only about eating habits, but, just like the Mediterranean Diet, it represents a lifestyle which focuses on the wellbeing of people and of the planet. The online panel, organized by the Future Food Institute, in cooperation with the Municipality of Pollica, Centro Studi Dieta Mediterranea “Angelo Vassallo” and I Love Italian Food, under the auspices of the Embassy of Italy in Tokyo, will dive deep into the parallelism between these two sustainable lifestyles.

AGENDA – (The panel will virtually connect the Kyobashi Living Lab and the Pollica Living Lab, the Paideia Campus, located in the Castle of Principi Capano.)

Follow live coverage of the event on the Future Food Institute channels:

This website uses cookies to improve your experience while you navigate through the website. Out of these, the cookies that are categorized as necessary are stored on your browser as they are essential for the working of basic functionalities of the website. We also use third-party cookies that help us analyze and understand how you use this website. These cookies will be stored in your browser only with your consent. You also have the option to opt-out of these cookies. But opting out of some of these cookies may affect your browsing experience.
Necessary 常に有効
Necessary cookies are absolutely essential for the website to function properly. These cookies ensure basic functionalities and security features of the website, anonymously.
Functional
Functional cookies help to perform certain functionalities like sharing the content of the website on social media platforms, collect feedbacks, and other third-party features.
Performance
Performance cookies are used to understand and analyze the key performance indexes of the website which helps in delivering a better user experience for the visitors.
Analytics
Analytical cookies are used to understand how visitors interact with the website. These cookies help provide information on metrics the number of visitors, bounce rate, traffic source, etc.
Advertisement
Advertisement cookies are used to provide visitors with relevant ads and marketing campaigns. These cookies track visitors across websites and collect information to provide customized ads.
Others
Other uncategorized cookies are those that are being analyzed and have not been classified into a category as yet.
保存して同意